We are proud to present the recipients of the
2020 Sylvan Adams Nefesh B’Nefesh Bonei Zion Prize.

The award recognizes outstanding Anglo Olim
– veteran and recent –
who embody the spirit of modern-day Zionism
by contributing in a significant way to the State of Israel.

“As we are all grappling with so much national and global turmoil, it feels especially meaningful to pause and recognize these incredible Olim surrounding Israel’s 72nd birthday… The individuals receiving this year’s Bonei Zion Prize are shining examples of the impact one can have on an entire field of study and practice, and they give us great hope for the State of Israel. Celebrating these honorees is a reminder that the Zionist dream is thriving.”

As Chief Psychologist for the Ministry of Education, Reuven Asch helped direct the establishment of psychoeducational clinics in every city and moetza in the country – including secular, religious, Haredi and Arab school systems. Reuven assisted nearly 1,000 Oleh psychologists in their integration into the educational psychology workforce within Israel and continues to do so today. Together with AMIT, Reuven helped establish Beit HaYeled in Gilo and acted as its first director. Beit HaYeled was a new model home for at-risk children. It consisted of 10-12 foster-like families living together in one central building. In each apartment there was a couple and a sherut leumi volunteer, taking care of 12 at-risk children, which allowed these children to experience a functional family model. This model is now popular throughout Israel and other countries around the world. A few years later, Reuven was approached by the Ministry of Social Welfare and the Jerusalem Municipality to establish a hostel for homeless youth in Jerusalem. The home took these youths off the street and acted as an emergency social unit to help them reintegrate into society. It was called Etnahta (a short normal pause for these adolescents). The youths there acquired tools to help them reunite with their families, find employment, receive an education, and develop a sense of hope for the future. In addition, in 2003, Reuven helped bring a new treatment method to Israel called the Peto method which helped children with cerebral palsy become more independent in all aspects of their lives. Today, the Peto method is widely accepted in Israel. 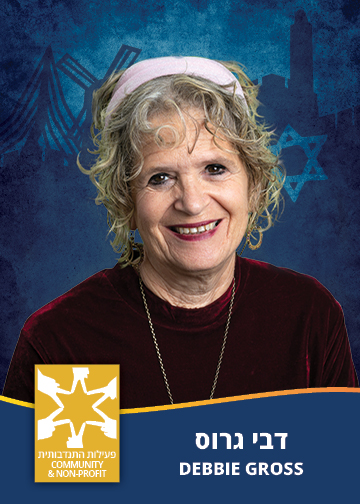 Debbie Gross is the founder and director of Tahel – Crisis Center for Religious Women and Children which has been serving women and children throughout Israel since 1993. Debbie made Aliyah to Israel in 1978 and since then has been a trailblazer in the religious community in the areas of domestic violence and child sexual abuse. She has developed educational workshop programs to give children and teenagers the skills to recognize and prevent sexual abuse and domestic violence. She has been an activist in helping communities throughout the world set up protocols to protect their children and women and has set up training programs for rabbis and religious professionals. She has trained thousands of volunteers in the areas of crisis intervention throughout Israel and the world.

Debbie has been invited to speak at international conferences throughout the world on the areas of child abuse and the prevention of child abuse in the religious community. She has given lectures at the World Congress on Family Law and Children’s Rights in Dublin, at the Charleston Child Trauma Conference and the International Conference on Child Abuse and Psychological Assessment in Barcelona.

In 2014, Debbie organized and hosted the first international conference in Jerusalem and then two successive conferences on “The Jewish Community Confronts Violence and Abuse” with over 650 participants from around the world. Debbie received the Jerusalem Mayor’s Volunteer Award in 2001 and the Jerusalem Foundation Teddy Kollek Award for Community Leadership and Excellence in 2003. In 2016 she was honored with the Israeli Knesset award for “Women Who Are Changing The World” and in 2017 “The Award for Recognition for Fighting the Battle Against Violence Against Women” by the Minister of Social Equality of Israel. Debbie lives in Ashkelon and is the proud grandmother of seventeen sabras.

Debbie made Aliyah in 1978 from Monsey, NY 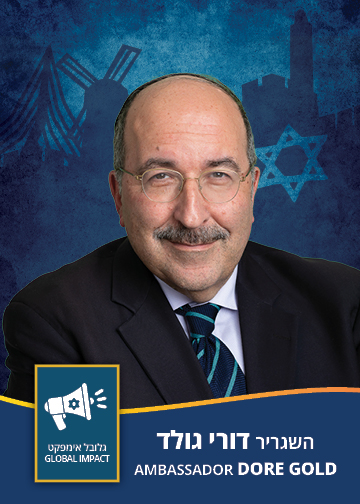 Ambassador Dore Gold is President of the Jerusalem Center for Public Affairs. He served as Israel’s ambassador to the United Nations in 1997-1999, and as the Director General of Israel’s Ministry of Foreign Affairs in 2015-2016. In that capacity, he was instrumental in expanding Israel’s ties in Africa, the Arab world, and Far East. He has served as an advisor on international issues to Prime Minister Benjamin Netanyahu and as an envoy to the Palestinian Authority, Egypt, Jordan and the Gulf States. Gold has a BA, MA, and PhD from Columbia University.

As a senior diplomat and recognized scholar, Gold is regularly called upon to share his expertise. He delivered testimony at the US House of Representatives for special Congressional hearings on recognizing Israeli sovereignty on the Golan Heights (2018); moving the American Embassy to Jerusalem (2017); and before the House Foreign Affairs Committee on Israel’s rights to defensible borders (2011). In 2009, he debated Justice Richard Goldstone on the veracity of the UN Fact Finding Mission on the Gaza Conflict.

He has written books on the Middle East, including three NYT bestsellers, and his articles appear in major international publications. 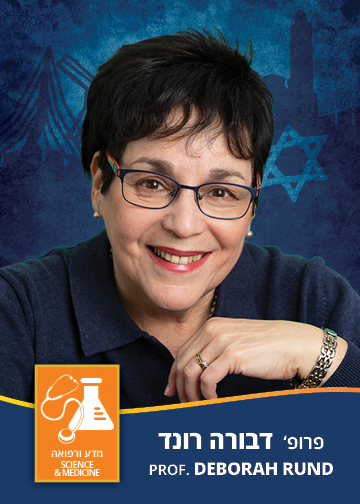 Prof. Deborah Rund has contributed her vast clinical, research and teaching skills to improving the lives of patients with hematological disorders in Israel and has made profound contributions in the field of hematology globally. Due to her work, Israel uses PCR both as a scientific and clinical diagnostic tool and has a much better understanding of the causes of hereditary anemias in many of the founder populations in Israel, such as immigrants from Kurdistan and Palestinians from Gaza and the West Bank. Through her contributions to thalassemia, there is a better understanding of the complications and comorbidities of the disease in different organ systems, and those who suffer from the disease are more likely to survive childhood.

Additionally, Prof. Rund served as Associate Editor of the British Journal of Hematology and has mentored scores of students pursuing MD and PhD studies. She has been awarded the Faculty Prize for Research and the Faculty Prize for Teaching from Hadassah-Hebrew University, in addition to being listed in Forbes Best Doctors in Israel 2017-2018. Prof. Rund has served as a member of the international affairs committee of the American Society of Apheresis, has advised the Israel Health Basket Committee on indications for therapeutic apheresis and has co-organized a conference on the technique. 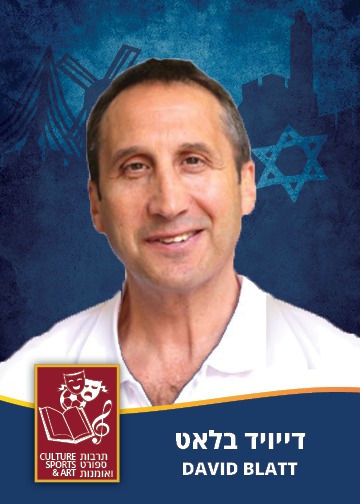 David Blatt is known as one of the most successful American-Israeli coaches in European basketball history. Before he started his coaching career, David played point guard at Princeton University from 1977 to 1981 and played in the Maccabiah Games for the USA national team that won a gold medal in 1981. He then played professional basketball in Israel for nine years before starting his full-time coaching career.

In 2006 David Blatt won the Italian Championship while coaching Benneton Treviso. He coached the Russian National team for 7 years and won the Eurobasket championship in 2007 as well as the Olympic bronze medal at London 2012. In 2014, he led Maccabi Tel Aviv to one of the greatest comebacks against CSKA Moscow in the EuroLeague semifinal game, proceeding to win the championship after beating Real Madrid in overtime. David has been the Israeli Super League Coach of the Year four times. During his time as Maccabi’s coach, he helped the team achieve new heights and recognition in Israel and worldwide.

After Maccabi, he coached the Cleveland Cavaliers to the NBA finals and went on to coach Olympiacos in Greece and Darussafaka in Turkey where his team won an historic Eurocup championship. 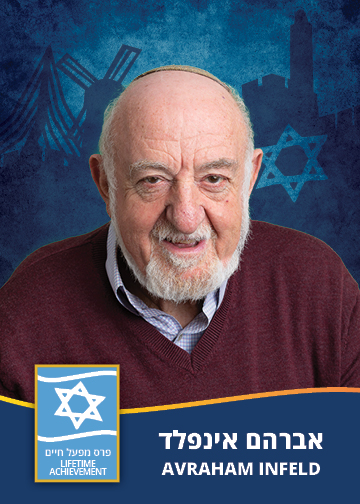 Avraham Infeld, President Emeritus of Hillel – the Foundation for Jewish Campus life – has invested a lifetime building Jewish Identity and strengthening the State of Israel. Avraham is the founder and director of a succession of innovative educational institutions. In May, 2012, Avraham was elected Chairman of the Board of the Hillels of Israel. He served in this office until July, 2018.

In 1970, Avraham founded Melitz, a non-profit educational service institution that fosters Jewish identity rooted in a pluralistic understanding of Jewish life and the centrality of Israel. He stood at the helm of Melitz for 30 years. He also served as chairman of Arevim; founding chairman of the San Francisco Federation’s Amuta in Israel; and chairman of the Board of Israel Experience Ltd., an independent company created by the Jewish Agency.

In the late 70’s and early 80’s, concurrently with the above, Avraham was also Director General of both Gesher Educational Affiliates, the Shalom Hartman Institute and served a three year tour of duty in London as Director of the Jewish Agency’s Youth Department for English speaking Europe.

With the advent of Birthright, Avraham served as its first International Director, and led the Planning Process which created one of the most successful and formative educational programs in the Jewish world. In 2003, Avraham was appointed President and International Director of Hillel – Foundation for Jewish Campus Life, and served in that capacity until September, 2006, when he returned to Israel to assume the Presidency of the Chais Family Foundation, until it was forced to close in December 2008, due to a massive fraud on Wall Street.

He continues to serve as President Emeritus of Hillel International, and as mentor on Tikkun Olam and the Jewish People to the Reut Institute in Tel Aviv.

Avraham is the author of “A Passion for a People” published November, 2017.

A native of South Africa, Avraham immigrated to Israel in 1959. He is married to Ellen Cohen Infeld, originally from Woodbridge, N.J., and they share four children, 16 grandchildren and 3 great grandchildren. He is a graduate of the Hebrew University in Bible and Jewish History, and of Tel Aviv University’s Law School. In 2005, he was awarded the Hebrew University of Jerusalem’s prestigious Samuel Rothberg Prize for Jewish Education, the first specialist in informal Jewish Education to be so honored. He was awarded honorary doctorates by Muhlenberg College in May 2006 and from Hebrew Union College in 2012, for his contribution to the field of education.
Avraham made Aliyah in 1959 from South Africa. 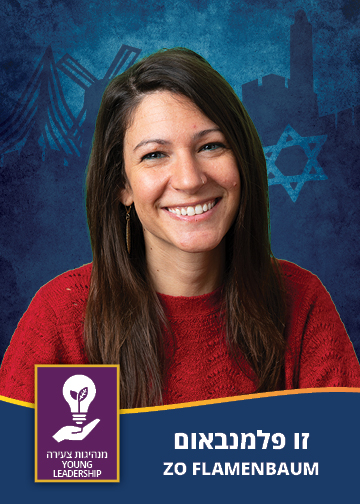 Zo Flamenbaum is a social entrepreneur who is dedicated to facilitating human growth processes through creativity, intention and community. She believes that self-development breeds positive social change, and so spends her time designing and hosting transformational experiences to awaken individual’s natural intelligence, integrating the worlds of personal empowerment and collective connection.

After making Aliyah, Zo was motivated by her own need for meaningful connection, deep conversation and supportive sisterhood. She founded School of Shine as a value-based educational platform for women on a mission to empower their voice; who are tired of the ‘default life’ and crave personal freedom through self-expression for more purposeful living.

Since opening in 2014, School of Shine has impacted thousands of women in Israel and beyond. SOS offers interactive workshops and playshops, online programs, mentorship matching, and wellness retreats. Together, the women of School of Shine are taking powerful, holistic, inspired action and shifting the paradigm of feminine leadership, empowering each other to rise, and of course, shine.

In addition to School of Shine, Zo works as a freelance journalist, and is a strategic consultant and content creator to support creative entrepreneurs and their purpose-driven businesses. She also serves as a writing and business mentor for women leading with action for good. Zo shares her own voice through her spoken word poetry and rap performances, personal stories, and a forthcoming Personal Growth Playbook for anyone seeking more purpose, passion and play on the daily.